Wetrix is one of the most addictive arcade puzzlers I have ever come across. Although it was a big hit on the Nintendo 64, the first platform for which it was released, it unfortunately failed to attract avid fans when the PC version came out shortly thereafter.

Gameplay in Wetrix is similar to Tetris in that you must organize random pieces as they fall from the sky. However, the pieces here are red and green arrows, droplets of water, and special pieces. Your goal is to collect water by using red arrows and green arrows to raise and lower sections of the land. After an initial round of building blocks, water droplets will begin falling from the sky and you must place the water in an area where it will be contained. The game ends if you let too much water flow over the edge of the world or through any holes (caused by random bombs).

What makes Wetrix incredibly addictive is just not just its attractive graphics or unique concept, although it has plenty of both: it's the many subtleties and surprises that will keep you glued to the screen. Just when you think you got a hang of it, bombs fall from the sky to wreck your dams. If you try to solve the problem by creating tall mountains somewhere on the board for them to hit, you risk disastrous earthquakes (that happen when land is raised too high) that often spell "game over." Special falling pieces include ice cubes, which freeze the water, and fireballs which evaporate it. Pieces fall faster in higher levels, each with its own secrets and challenges (hint: kill the duck when you see it). There are also many ways to increase your score even faster, such as building multiple lakes, getting Rainbow Multipliers, etc. Overall, Wetrix is a must have for any Tetris fan. Too bad the sequel Wetrix+ was released only for SEGA's Dreamcast console.

This windows game is kinda clone of tetris but something completely different. In the game you'll get different kinds of blocks which you have to put on the gamefield: walls, water, bombs, firebombs, etc. Target of the game is to try to build walls in which you can store the water. As long as the water isn't spilling too much over the gamefield (leaks) the game continues. A bar on the right side of the screen will show you the status of the leaks. The game is very addictive and has pretty good graphics and real sounds (even voices :) ). Have fun!! 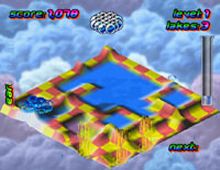 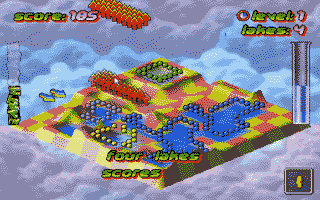