Probably two of the rarest Apogee games in existence, Word Whiz and Trivia Whiz are two decent trivia games by George Broussard and Scott Miller, two founders of Apogee. Word Whiz is the more limited and straightforward game of the two: you must pick the right synonym or definition of the highlighted word from 4 multiple choices. In Trivia Whiz, the questions span a wide range of subjects, and there is a nice real-time mechanic: you must answer each question within fifteen seconds to get bonus points. There are "free misses" you can use as well. All in all, fun games that trivia fans will enjoy - and Apogee fans will definitely delight in acquiring ;) Last but not least: an interesting anecdote is that Trivia Whiz was actually not published under Apogee name but "Micro F/X," a small company that George Broussard ran before he teamed up with Scott Miller in 1990 to form Apogee. 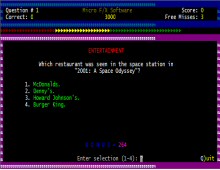