Conversion of Tecmo's arcade follow-up to the fun game Bombjack. I loved both the C64 and the arcade version of the first part. This follow-up that adds a scrolling multi-screen dimension never was one of my favorites. The fairly poor PC conversion didn't change that by a lot.

Mighty Bomb Jack is a rather obscure superhero that starred in his own video game in 1984. Gameplay is similar to classic arcade game Bomberman (from which the game is probably *cough* "borrowing" the idea). The layout of the screen is set up with platforms and bombs lying around and an occasional one-up or "B" symbol for bonus points, all laid out against colorful backgrounds of famous sites such as the Sphinx of Egypt. Our hero Bomb Jack has the ability to leap very high and float gently down to the platforms. The goal is to collect and use bombs on enemies, which is all manner of strange creatures such as mechanical birds and robots. Observing their pattern is key to winning the game, because you can get trapped all too easily. If you collect enough bombs, you can turn enemies into coins to collect for extra points.

With unassuming, fun gameplay, Mighty Bombjack is a fun little action game with some arcade elements thrown in. Doesn't take itself too seriously, but provides plenty of jolly good time. 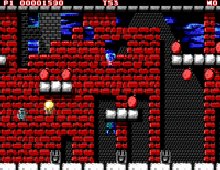 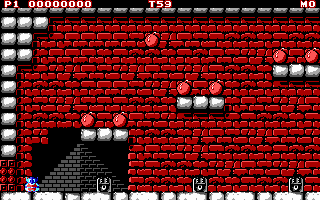