Another excellent ASCII game by Scott Miller of Apogee game, Maze Runner was included on Softdisk's "Big Blue Disk" number 26. Here's a summary of plot and gameplay from the game's instructions:

"A fabulous treasure, the Heart of Courage, lies at the bottom of the Dungeons of Ezam. Can you retrieve it?

This game puts you in an invisible maze, populated by deadly monsters. After the maze briefly appears on the screen, most walls will vanish, leaving you to grope around in the dark with only some pieces visible. Walls will appear when you bump into them. If you land on a pickaxe, that lets you chop down the next wall you hit. Pickaxes can be accumulated, but will be used whenever you bump into a wall, so they'll run out quickly if you don't stick to the clear paths. Try to save them for where they're really needed, though this takes good memory of where clear paths exist and where they don't.

If you locate and land on the map, a flashing blue square that appears in some mazes, the whole maze becomes visible and you can work your way through the rest of it by sight. Just watch out for the monsters, which kill you if you run into them or they run into you. Teleport scrolls give you a chance to escape sure death by jumping to a random spot elsewhere in the maze.

Get out the other end, and you'll have to do it all over again in another maze, as you work your way deeper into the dungeon. Get killed, and that's that; as in real life, you get only one chance. Good luck!

One note: the opening screen reports a rumor that pickaxes are a sure defense against the dungeon's inhabitants. As far as I can see, this rumor is false, since the critters kill me just as easily when I've got axes as when I don't. But, what do I know? I'm just the editor!" The game is a lot of fun, and a great proof of how much you can do with just ASCII characters ;) 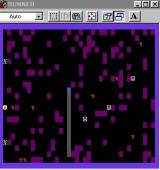