Joe is a fun brainteaser that requires precise timing as well as reflexes and strategic planning. You control Joe, a Pac-Man-lookalike who has to get to the exit on each level. Along the way, Joe must collect keys to unlock doors and avoid sharp obstacles. Played from the 2D side view, the gameplay is easy to learn: the arrow keys move Joe around and make him jump over obstacles. What makes Joe a tricky game is the fact that you must precisely calculate each jump so that Joe doesn't land on the thorns, which will force you to start the level over again. The game is quite difficult, but the challenge should keep puzzle fans happy if they haven't already given up after the first few levels. The game also adds more challenges in later levels, including Igor, Joe's enemy who chases him around the level, lifts, and other items you can interact with. Overall, I had a lot of fun with the game, although the huge playing area and frustrating difficulty will make puzzle novices think twice before attempting this freeware old game. 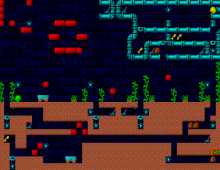 People who downloaded this game have also downloaded:
Lemmings Holiday, Lemmings, Lemmings 2: The Tribes, Humans, The, Humans 2, The