Based on classic TV comedy series of the same name, The Honeymooners is long on atmosphere but short on gameplay. Although graphics is only in 4-color CGA, the many cutscenes taken from the show are well-executed, with enough hilarious money-grubbing quips by the one and only Jackie Gleason (who played Ralph Kramden in the show) to keep fans satisfied.

Gameplay, however, is a tedious affair: the game consists of 4 "mini-games" that must be solved in order, one by each of the show's four major characters. The goal is to get both the Kramden and Norton families to Miami Beach by earning enough money, as quickly as possible before hotels have no vacancies left. You must help Ralph earn money as a bus driver by picking up passengers, help Ed find leaks in the city's sewers and fix them, and help Alice assemble jigsaw puzzles in the department store she works for. At the end of each mini-game, you can choose to play "The $99,000 Answer," Ralph's favorite show, to try to win more money. Overall, The Honeymooners is an average game that could have been much better with a much-coveted TV show license. Instead, the game is a banal collection of familiar puzzle games with arcade elements, slapped together under the common premise of the TV show. Although this is probably a keeper for The Honeymooners fans, it's not of much interest to anyone else. 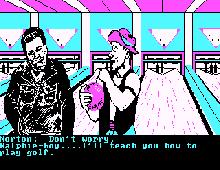