Dogfight is the best modern remake I've ever come across of Sopwith, an early 1980s air combat classic. In addition to upgrading the graphics to SVGA with incredibly high details of both planes and scenery, Dogfight adds numerous gameplay options that makes the game even better: more types of airplanes (mostly 20th century fighters), backgrounds, and other options. You can even tweak different parameters in the game's physics to make the game easier or more difficult. There's also a number of multiplayer options including over the Internet, although it seems that not all of them have been implemented.

The computer AI is more than adequate in the game, and other factors such as ground turrets and reasonably realistic gravity make the game much more complex than the original Sopwith. Too bad the game was never fully finished - this is the 0.80 beta version, but as far as I can tell everything works fine and all the options enabled, except for a few multiplayer modes. Even in this beta version, Dogfight already ranks among the best-looking and the most fun dogfighting games for the PC.

The game is in German, although it shouldn't be hard to figure out what the options do by trial and error... that's how I did it anyway ;) 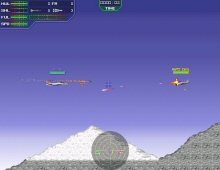