One of these old games made in Pascal, Snooper Troops is a fun, educational detective game. The game is rather easy, making it an excelent choice for young children. The game is played through the text based interface, so called SnoopNET, which informs you about the current case, possible criminals and such. I hate that annoying beeping sound though...

One of the world's first detective games for kids, Snooper Troops is a great edutainment title that truly stands the test of time. Second and last in a short-lived series from Tom Snyder / Spinnaker and subtitled "Case 2: The Disappearing Dolphin," Snooper Troops casts you as member of a Snooper Trooper, a world-renown private detective team. Your job is to find out who stole Lily, the lovable Dolphin, from the Tabasco Aquarium, and why.

Snooper Troops plays like a typical detective adventure, except that everything is simplified for kids ages 10 and above. Although you will need to carry out standard investigating techniques such as questioning witnesses and searching the premises for clues, the game's best feature is easily the plethora of high-tech gadgets that makes investigation much easier. The SnoopNet computer helps correlate information, a camera is provided for you to take Snoopshots, and a notebook automatically keeps track of all the clues you unearth during your investigation.

Kids of all ages will definitely have fun with Snooper Troops. It is immediately accessible, user-friendly, and has an interesting plot to top it all off. Kids will learn to take notes, draw maps, organize information, and hone their deductive and reasoning skills. Highly recommended! Too bad only two games in the series were ever released. 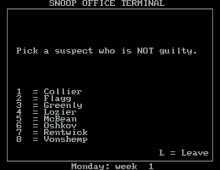