One of the best reference/educational CD-ROMs ever created, The Playboy Interview: Three Decades was unfortunately a commercial failure for IBM's short-lived Multimedia Publishing Studio. Perhaps this is largely attributable to the possibility that too few people think of the Playboy magazine as anything but a high-quality "soft porn" magazine. Which is a shame, because most of the Playboy Interviews, one of the magazine's regular columns, is always one of the most well-written, interesting, and candid interviews you'll ever find in any publication. From celebrities such as Sting, Tom Hanks, and Marlon Brando, to famous politicians such as Malcolm X, Yasir Arafat, to successful businessmen such as Bill Gates, Ted Turner, and Lee Iacocca, the Playboy Interview always shines with penetrating questions that not only showcase the interviewer's depth of research, but almost always spark interesting (and often heated) answers that afford a rare glimpse into certain aspects of the interviewee you would not find elsewhere.

This excellent CD-ROM, released shortly after Playboy published a book of the same name, includes the text of all 352 interviews Playboy conducted between 1964 and 1994, with over 1,000 photos and many audio and video clips (which unfortunately had to be excluded from this download to save our server space - but since the audios are from the original interview tapes you can read in full, you are not missing much ;)). Since a lot of these interviewees have passed away since the interview, the Playboy Interviews serve as an invaluable source of insight into the thoughts and personality of a significant percentage of the 20th Century's most influential individuals.

Not content with simply presenting the excellent interviews, IBM included a number of innovative research features that can often uncover fascinating themes and similarities or differences among the people interviewed. You can search by concept, people, and places, and browse memorable quotes from the interviews on a wide range of subjects ranging from "civil rights" to "the meaning of life."

Whether or not you are a regular reader of Playboy magazine, this CD-ROM is a must-have. It is educational, insightful, and of great historical interest - especially because Playboy's book of the same name includes only 30 interviews as opposed to the entirety of three decades' worth of work. And if you have a very low opinion of Playboy magazine, this is something that will change your mind. 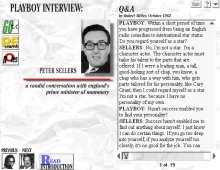 People who downloaded this game have also downloaded:
Dr Ruth's Computer Game of Good Sex, Periodic Table of The Elements