Preambulatory note: This review and the download is dedicated to Jorge a.k.a. Reverendo, the superb artist behind The Kennel, a comic strip about this site... and one of the best-kept secrets on the Internet ;) Reverendo, thanks for all the wonderful work that I should pay you for! This CD-ROM is for ya.

Ron Mann's Comic Book Confidential is a one-of-a-kind documentary about evolution of the comic book industry in the U.S. Voyager Company, as usual, combines their par excellence production skills to add many extras to the movie (which is included here in full in QuickTime format), making this CD-ROM a must-have for every comic book fan.

But first things first: let's talk about how good or bad the movie is. In Voyager's blurb, "[The movie]... combines interviews, historical footage, animation, and montages to trace the development of the comic book from the very first (Funnies on Parade) in 1933, through '60s counterculture favorites like The Fabulous Furry Freak Brothers, to the 1980s revival, as exemplified by Batman ([Frank Miller's superb] The Dark Knight Returns). This witty, incisive movie features interviews with influential authors of commercial, alternative, and underground comics, such as William Gaines, Sue Coe, Art Spiegelman, Al Feldstein, Lynda Barry, Will Eisner, Shary Flenniken, Frank Miller, Dan O'Neill, and R. Crumb, with many of the artists reading from their own works. Stan Lee brings Spiderman's money worries to life, Charles Burns becomes Big Baby, Jack Kirby reenacts the birth of Captain America, and more."

Seeing your favorite comic book author read from their own work is definitely the movie's strongest point. Seeing stationary comic book panels 'animated' by camera movements and zoom motions is a very innovative and exciting mechanics that fit the movie perfectly. Unfortunately, there are over 20 such sequences crammed into the movie, so each of them is quite short. The other stuff in the movie are handled less well, I think. Mann spent too much time asking artists about their life outside the comic book - and unfortunately some of these guys are as ordinary as the rest of us, making these interviews more boring than they should be. The history bits are quite interesting, though, and includes many rare historical footage (the Congressional hearings from the '50s "proving" the link between comic books and juvenile delinquency is quite an eye-opener). I think with more animated comic-book sequences and more focus on the comics than the artists' lives, the movie would have been much more effective at enticing non-comic book fan to check out the highly underrated medium (in the West, that is - comic books are huge in Asia where I live). As it stands, it's a movie that comic book fans will love, and will make others at least appreciate the trials and tribulations early pioneers went through.

This CD-ROM from Voyager includes the full movie, plus extras such as over 120 pages of comics by the film's featured artists, plus their biographics and publishing histories (as at 1994 anyway). You can also read the "comic book code" in full. All in all, a must-have for every comic book fan, and another solid title from Voyager - a now-defunct company that in my opinion was the best 'edutainment CD-ROM' producer that ever existed. 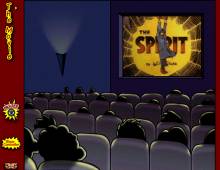