Released by Compton's Newnedia in 1992, Berenstain Bears Learning Essentials is an edutainment program that targets preshoolers, starring characters from the famous children books of the same name. The program is a compilation of three separate programs that teach puzzles (jigsaw), colors, and music. The game doesn't quite teach as much as let kids play with the concepts. Berenstain Bears Colors, for example, is basically just an interactive coloring book similar to Compton's earlier Wild Learning Safari, except with the famous bears as main characters. Likewise, Berenstain Bears Puzzle is just a collection of jigsaw puzzles based on scenes from the book. The only obvious edutainment value I can see in the game is Berenstain Bears Music, which lets kids compose their own music, and therefore teaches musical notes (albeit in a roundabout way). Overall, though, one could argue that preschoolers learn better by playing than by actually learning, so this program may be considered ideal ;) It's not as varied as Broderbund's classic preschooler package The Playroom, but it's well worth a look especially for young fans of the good-natured bears. 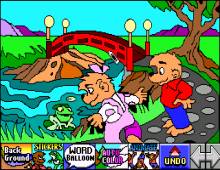