Brief synopsis of Episode 9: Finally, Max faces the Skunk King and he's forced to accept a challenge: if he will be able to go through the abandoned wing of the fortress, and then confront the King himself, he and his friends will be free. Max will confront some tough Skunks and some deadly traps, until the final confrontation with the Chronodemon, putting an end to the first saga of his adventures - But don't expect something spectacular... Time Runners is a series of action/adventure games that are lackluster in both aspects, although a little better than their predecessors - but you must consider that the predecessors were absolutely terrible ^_^;. First of all, the engine used is the same of the Spider-Man game. No, don't panic. At least, Max's animations are way better, and more fluid. The backgrounds are detailed, and always adequate. The cutscenes are nice too, but they often suffer for blurry colors and poor 3D-rendered objects. Sound is almost non-existent, and set at a so low volume that I had to put my speakers to the maximum. Otherwise, you won't even notice it.

Overall, despite all the ambitions and financial efforts behind, the Time Runners games are only little above the amateurish. Nothing can save them from the Real Dog tag, but, at least, they have a little more value if taken all together, playing them one after another. If you have the courage :P 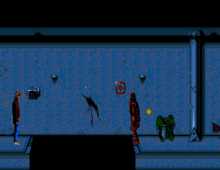