in Episode 4, Max has arrived in the medieval age, after escaping from the prehistory. A peon, who offers an hideout for his scooter, talks to him about a Black Knight and red-armored warriors - Red Skunks! They are already here. Now Max must reach the Black Knight's castle and find a way to stop the hated robots. There are only two puzzles here (if you really dare to call them so), but the encounter with a mage is quite funny.

Like many other Simulmondo products, Time Runners is a series of action/adventure games that are lackluster in both aspects, although a little better than their predecessors - but you must consider that the predecessors were absolutely terrible ^_^;. First of all, the engine used is the same of the Spider-Man game. No, don't panic. At least, Max's animations are way better, and more fluid. The backgrounds are detailed, and always adequate. The cutscenes are nice too, but they often suffer for blurry colors and poor 3D-rendered objects. Sound is almost non-existent, and set at a so low volume that I had to put my speakers to the maximum. Otherwise, you won't even notice it. 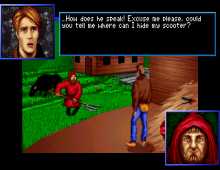