Brief synopsis of Episode 10: After the elimination of the Skunks' menace, Max has resumed his everyday life. But the troubles aren't fnished. During the night, a man called Simulman (???), a Time Sentinel like Jack Stone and the Bounty Killer, contacts him saying that he's chosen to became a Sentinel himself, and he must pass a training in a virtual world first. Before he can even ask, our hero is thrown in a maze of rooms with some inspiration to the palace in Prince of Persia (!). And, after leaving them, a surreal landscape with slime and strange constructions awaits him...

Time Runners is a series of action/adventure games that are lackluster in both aspects, although a little better than their predecessors - but you must consider that the predecessors were absolutely terrible ^_^;. First of all, the engine used is the same of the Spider-Man game. No, don't panic. At least, Max's animations are way better, and more fluid. The backgrounds are detailed, and always adequate. The cutscenes are nice too, but they often suffer for blurry colors and poor 3D-rendered objects. Sound is almost non-existent, and set at a so low volume that I had to put my speakers to the maximum. Otherwise, you won't even notice it. 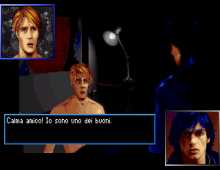