Episode 1 starts the adventure: we are introduced to the hero, Max, his girlfriend Jessica and his friend, super-genius Lucas. At the same time, in a distant future, the Skunks, intelligent robots who enslaved the humans (mmmhhh... sounds original), lead by their king who calls himself the Chronodemon, are going to invade various epochs using a time travel device. Trouble starts when a similar machine made by Lucas creates an interference, and a Gate opens in Jessica's house - the stone in the ring that Max gave to her as a present, is of the same type used by Skunks for time Travel. The robots kidnap Jessica. Lucas puts a time travel device on a scooter, and Max uses it to start the risky rescue of his beloved one, ending up in the prehistory, where he will find some allies...

Like many other Simulmondo products, Time Runners is a series of action/adventure games that are lackluster in both aspects, although a little better than their predecessors - but you must consider that the predecessors were absolutely terrible ^_^;. First of all, the engine used is the same of the Spider-Man game. No, don't panic. At least, Max's animations are way better, and more fluid. The backgrounds are detailed, and always adequate. The cutscenes are nice too, but they often suffer for blurry colors and poor 3D-rendered objects. Sound is almost non-existent, and set at a so low volume that I had to put my speakers to the maximum. Otherwise, you won't even notice it. 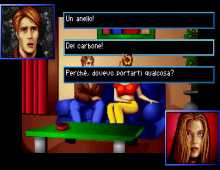