Why is the main character of this game called PC Man and not Pacman (as the legendary character) is unknown to me. Probably because Onion Software had no rights to use Atari's brand name... So, this is actually Pacman, but the PC version of it. Go around, eat those dots and stay away from ghosts. 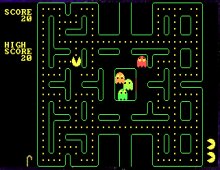