Nomltest FS is one of the best Space Invaders clone you'll ever play, although you won't think it likely from looking at the screenshot. Although the graphics are nothing special (with "ripped" sprites from Space Invaders, no less), what makes Nomltest FS unique and addictive are the cool gameplay modes. Best of these is the "eat bullet" feature: you can 'eat' enemy bullets by capturing them, and holding down both shoot keys expands your eat radius (although slowing you down). Shooting bigger enemies are worth more points, but you can get huge bonus points from clearing whole waves of smaller enemy ships.

Like all addictive shooters, it is rather hard for me to explain what makes Nomltest FS ticks: suffice it to say that I spent almost 3 hours playing this small <300KB gem when I first came across it - something I haven't done for a very long time (well, not since Gunroar anyway). The game is much deeper than it first appears - I am still trying to figure out how the "Kuidaore Rule" really works (apparently, it has to do with matching bullet colors to your ship's color, which you can change at will). And while the graphics is not much to look at, the gameplay is very fast and furious, and the music is quite catchy. Last but not least, the game saves your replays, making it easy for SHMUP masters to boast their achievements publicly ;) All in all, a wonderful game that definitely belongs in every SHMUP fan's collection. Recommended! 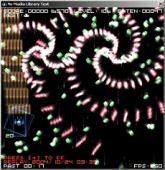