Johnny Castaway is not really a game but a screensaver but what a screensaver! At least to me it seems like a game because the entertainment is as good as a game. In the screensaver you will follow Johnny Castaway that has been left on a desert Island and no, the island is not as big as the one Robinson Crusoe was left one. It is more like a few meters to each site.

Because of the size of the island it just makes all the events that happens even more impressive because there aren't any limits to what the poor Johnny Castaway has to go through including a seagull that steals his things, falling in love with a mermaid, being attacked by pirates and even managing to escape from the island just to find himself at the island not long after the successful escape.

This screensaver is really great entertainment and there are tons of hours of random events and don't forget that certain special events are included as well such as Christmas and many more things. Johnny Castaway is one hell of an idea.

This is one of the most entertaining screensavers I've come across. Watch a castaway Johnny perform amusing antics while he struggles for daily survival on a tiny island. The program has numerous scripts that are randomized every time, and special skits for special days such as Christmas and New Year's Eve. Watching Johnny is always fun, interesting, and definitely more fun than playing an average game :) Sometime in 1995, Sierra released the program as freeware, to cheers of Johnny's fans worldwide :) 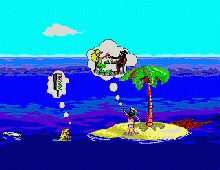