General Admission's Sport Pinball series rank among some of the worst pinball games ever made. This Baseball edition is no exception: the table is boring once you pass the initial "ooh, sport-themed table" novelty in the first few minutes.

The table looks nice at first. True to the name, it's baseball-themed, and you can score "home runs," as well as tripples, doubles and singles. But that is about it. There is simply not enough modes and table objects to keep you from getting bored - hitting home runs multiple times to get higher score is just not fun. To add insult to injury, ball physics is suspect: the ball would sometimes speed up inexplicably, and doesn't feel realistic at all.

While an interesting concept, Sport Pinball games are simply too repetitive to hold your interest longer than a few minutes. It lacks modes, bonuses, and any semblance of a good ball physics. Even ERE's early pinball games are much more fun than this forgettable Real Dog. 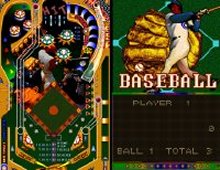