Wishbringer is probably the most underrated game to have sprung from the fertile imagination Brian "Professor" Moriarty, of Loom fame. In contrast with Moriarty's earlier philosophical classic Trinity, Wishbringer is a whimsical, light-hearted fantasy game designed with IF beginners in mind. In Wishbringer, you begin as a mail clerk in the Festeron Post Office, who is sent to deliver a letter to the Magick Shoppe at the other end of town. When you leave the Shoppe you discover that its owner has slipped you the Wishbringer stone, and that the town of Festeron has changed into a dark caricature of itself called Witchville. As you explore, you find that the former items and occupants of the town have transformed into twisted alter egos of themselves. Naturally, your mission is to defeat the Evil One and your boss, Mr. Crisp, and to transform the town back into Festeron, with the help of the Wishbringer stone, some friendly platypii, and your own raw wits.

In keeping with it being a "beginner's game," Wishbringer's puzzles are very easy, and most of them have multiple solutions, solvable either through reasoning, or using the Wishbringer stone to wish for some sort of aid. The stone has limitations, however: if you rely too much on the wishes, you may fail to acquire items that you may need to solve later puzzles. This basically forces you to think about whether the puzzle you're stuck on is hard enough to warrant a use of the stone, although most people would just "cheat" by saving and restoring the game. As in Moriarty's other works, the town of Festeron is vividly depicted in detailed descriptions, full of colorful and unique characters. While the puzzles are easy, they are not typical-- the solutions to many of them are quite creative, even when solved with the Wishbringer stone. I played the game the second time just to use the stone on as many puzzles as I could to see what the alternate solutions are.

In the end, Wishbringer is one of the most fondly remembered games among die-hard Infocom fans, although it remains relatively unknown to the masses (despite sharing the same fantasy world as the immensely popular Zork trilogy). If you are a novice IF fan and prefer a "gentle" game that you can play leisurely without worrying about grues lurking in the shadows, or if you have never played an IF before and want to be introduced to the fabulous world of interactive fiction, Wishbringer is the perfect choice. Highly recommended!

Note: This is the "Solid Gold" release, which includes the "InvisiClues" hintbook as on-line hints. The game file is Inform format, so make sure you download the appropriate interpreter first.

An adventure fantasy game for beginners. You play some postalguy in a peaceful village. When you deliver post to some magic shop. Before you know it your town is full of ogres, trolls and stuff. You'll have to find the Wishbringer: a magic stone in order to restore the peace in your village. 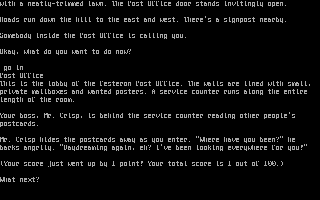