The only game Infocom published on the console system, Tombs and Treasure is a lackluster adventure/RPG game set in the ancient ruins of Central America. Although the game looks like a typical console-style RPG when you are walking on the world map (i.e. top-down view, looking at your party as small anime characters), it switches to a traditional first-person perspective when you enter a new location on the map. The controls are simple: a row of icons represent common verbs (TAKE, LOOK, and so on), and all the objects you can interact with are highlighted by name - no more pixel-hunting here. One annoying quirk is that the game doesn't tell you which exits are available from the location, so you'll just have to click on all the directions (N, S, E, W, up, and down) from each location to see what the possible exits are.

The NES console isn't well known for solid adventure games, and unfortunately this title (developed by Nihon Falcom of Lord Monarch fame) is no exception. Even if we ignore the fact that this was released by the master of storytelling, Tombs and Treasure is a disappointing game. The plot is cliché (explore the ruins to find the missing professor), the writing very banal (and nothing compared to the outstanding prose of Infocom's all-text adventures), and the puzzles typical and uninteresting. Infocom fans may want to try this one out anyway for curiosity's sake, and the game's easy level and decent graphics might appeal to young children as a way to introduce them to the genre. The rest of us should stay clear of this game, and feel thankful that Infocom's experimental foray into non-PC systems only lasted this one game. 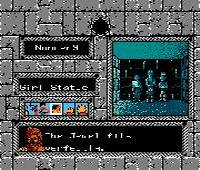