Secret of Monkey Island, The

When LucasFilm Games (now called LucasArts) first started, it was small and consisted of only a few adventure games. Games such as Maniac Mansion and Zak McCracken. Monkey Island 1 was the third adventure game by LucasArts, a game inspired by the Pirates of the Carribean Walt Disney World theme park ride. It was created and designed by none other than the famous Ron Gilbert who went on to work on Sam and Max Hit the Road and Day of the Tentacle. Steve Purcell, (creator and designer of the well-loved characters Sam, the Bogart speaking dog detective and Max, the hyper psychotic rabbity thing), also created some of the backgrounds and animations in this game. The fabulous music and theme songs were designed by the great and talented musicians of Earwax Productions. The LucasFilm company was the first to incorporate the SCUMM scripting system, which would later be followed by some of the greatest adventure games to hit the market: Broken Sword, Beneath a Steel Sky, and many more. The game was made in 1990, and was a smash hit when it entered stores.

The story is one of the best in the adventure game market, and I personally find it flawless. No doubts about it. It incorporated humor throughout the entire game, and anyone playing it will be laughing from the time they start the game to the time they finish it. You play the role of Guywood Threepbrush, uh, I mean, Guybrush Threepwood, a young boy who washes up on the shores of Melee Island, and decides he wants to become a pirate. He finds the nearest pirate leaders, who just happen to be in the nearest bar drinking grog, and asks that they enlist him in their pirate crew. They agree to do so on one condition - that he beats the three pirate trials which consist of: finding the Treasure of Melee Island, fighting the Sword master of Melee Island in a daring insult sword fighting duel, and stealing the sacred treasure out of the governor's mansion. Guybrush meets the governor, a beautiful and rich woman named Elaine Marley and falls head over heels in love. But before he can do anything about it, she is kidnaped by an undead corpse pirate named LeChuck and his bony skeleton crew, and whisked away to their hideout under the cursed, cannibal-ridden Monkey Island. He must get a crew together and rescue his damsel in distress before LeChuck makes her his bride.

This game has the biggest GUI I've ever seen! The GUI is ridden with commands, but none you haven't seen before. It is the same as in the adventure games Indiana Jones and the Last Crusade and Zak McCracken and the Alien Mind benders. The inventory is displayed by the GUI, and is easily accessible. There is a wide range of commands consisting of: Look, Walk, Pick up, Push, Pull, Turn on, Turn off, Give, Use, Open, Close, and Talk to. You may access the in-game menu by pressing F5, from where you can Load, Save, and Quit. As in all adventure games, if you get stuck, search everywhere, talk to everyone, and try to pick up everything. And believe me, everything has a really funny comment behind it, so do everything.

The music in the game is wonderful, certainly worthy of a movie soundtrack or an Oscar nomination, even for midi music. You probably won't get through the game without hearing some masterpiece of music. My personal favorites were the theme song played at the title screen, the song played when each of the new story parts screen comes up, and LeChuck's theme song. The puzzles in the game are by no means easy, and should be a little difficult even for veterans of Sierra's games. The graphics are simply stunning for the time it was made, and even for pixels, it borders on the realistic. Definitely worthy of an award. Another thing I liked about this game is the fact it doesn't have the annoying pixel hunt you normally see. The cursor displays the name of the hotspot when it crosses over it, telling you where it is.

I loved this game. When I first popped it into my CD drive, I figured it would be another average adventure that wouldn't be able to call itself better than Space Quest. Boy, was I wrong! I couldn't believe my eyes and ears, this game was amazing! I have probably replayed this game 100 times without getting tired of it. So as I find this game to be one of the greatest adventure games, I think it is especially deserving of a 100 score.

Almost everyone has a dream of what he or she wants to become when they grow up. Some of us wanted to become cops and others wanted to be teachers. All Guybrush Threepwood ever wanted is to become a pirate. That's why he came to Melee Island. Unfortunately, accomplishing his dream wasn't going to be as easy as he expected. To become a pirate, he has to pass the three trials. On one of these trials he will meet Elaine Marley, the governor of Melee Island and fall desperately in love with her. Because of that, he will eventually have to face the fearsome ghost pirate LeChuck who is also in love in Elaine, armed only with his sharp wit and even sharper tongue.

Secret of Monkey Island is the ultimate adventuring game, a true legend of its genre, a classic if you will. Even though it's sound and graphics aren't exactly breathtaking today and probably not when it was released either, it's game play value is matched by only a few more games in the entire history of gaming. This game simply has that something. Puzzles are all funny and interesting, not too challenging, but not too simple either.

Interface is very user-friendly, simple but powerful, with command lines you choose with your mouse and pictures of items in your inventory in the later version; in the earlier version the items were only listed. Atmosphere is also very good, slowly dragging you inside the Monkey island world, but definitely the best thing in this game is its humour. This game is full of it: irony, sarcasm, parodies ... The funniest and the best part of the game is Insult Sword fighting, a very original concept that became somewhat of a trademark of the Monkey island series, especially the fourth part.

What can I say? This game simply has that magic inside that chains you to your PC and holds you until you finish it. That's right. Sooner or later you will come to that sad moment when you realize that your journey is over. And what then? Well, there are always sequels...

The Secret of Monkey Island in one of the best adventure games available. This piece, is the prequel to other 3 games from this series, but for many people this is considered to be the best one.

You play Guybrush Threepwood, a young man who has a vision - becoming a pirate.

Aiming for his goal, Guybrush heads on to Melee Island, and there is where he meets Lechuck, a very vicious pirate ghost.

Guybrush faces a challenge - in order to become a pirate he will have to expertise in a areas, suitable for pirates: stealing, swordfighting and treasure hunting.

This is where our hero, Guybrush, enteres the picture, in order to save the beautiful governor and live happily ever after.

Nowadays, more than 15 years after the first game was released, Monkey Island series is still counted for the best adventure series ever released, and is still discussed all around the gaming forums and communities.

Besides the great detailed animations, the game introduced us the SCUMM engine (who was originally coded for the Maniac Mansion series), which enables us to do basic operations, like 'turn off' 'turn on' 'talk' 'push' and more with a click of a mouse.

Another great feature of the game is the little hints about upcoming releases by Lucasfilm Games (later known as LucasArts), which are spread all over the game, that spice up the gaming experience.

If you love adventure game and you didn't play this masterpiece yet, and even if you're not that kind of adventure games fan, this is a must! 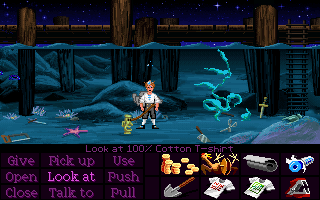 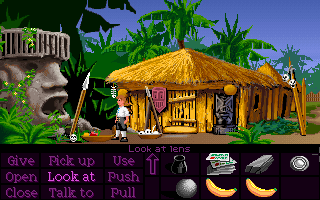 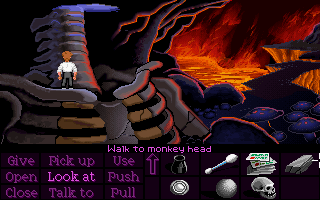 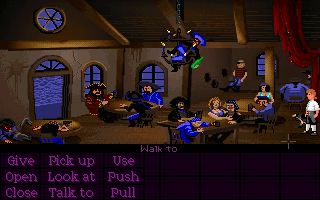 Secret of Monkey Island, The screenshots