Sam and Max Hit the Road

LucasArts designed a graphical adventure in 1993 for DOS that made a mark on the cartoon games. Sam & Max Hit the Road was based on a very popular comic book that many adults remember reading as a child.

Take on the role of two freelance police officers known as Sam & Max who are a canine shamus and a very hyper kinetic rabbit. You will be taking on the assignment of finding Bruno the Bigfoot. He has gone missing last seen at the circus where he was. Along the way you discover that Bruno kidnapped another person from the circus known as Trixie a girl with a giraffe neck. During your searching you will go all across the United States trying to find the whereabouts of Bruno. This will take the player to many weird landmarks that are actually around the United States including the world's largest ball of twine. The game has been designed as a side scrolling point and click game. This made the game very simple to play for all ages and gamer experience levels.

The character that you will be controlling will happen to be Sam. You will still have your sidekick Max with you, but he will generally just follow you around helping out. You will have the ability to go anywhere in the screen. With doing this you can look at various objects, utilize some of the objects, speak to some things, and even place some objects into your inventory. You will need to unlock clues on your travels to open more areas of the game. Once you have found all the clues you should be able to determine where Bruno is hiding out. This can be a lengthy task to locate all the clues since you will not only be finding objects but you will have to speak to people you have encounters with.

Throughout the game there has been several mini games included for added fun. You will have to actually find these mini games to have the ability to play them. Each of the mini games are a little different compared to the actual plot of the game, but this is a great break from all the searching and hunting you will do.

Become one of the best investigators the United States will ever see. Rescue Trixie from Bruno the Bigfoot before its too late. The clues will slowly but surely come your way and you will discover everything you need. Save this young lady and become famed all across the United States. Sam & Max Hit the Road is a great addition into the graphical adventure game categories and is a definite must for any gamer no matter how young or old they are.

Oh man where to start...All I can say, is this is one of the best games that I have ever played in my life. I first played it when I didn't know how to even use a computer. So really, I didn't play it, I just watched my brothers play, but even that was amazingly fun. Then when I was older and was able to download it free from one of these super awesome websites, I was like a kid in a candy store. I was so excited. Right when the game started, I remembered my childhood come back to me. This game is great in every way.

This storyline is hilarious, but I don't want to spoil it, so you guys have to play it for yourselves.

Sure, this game is mainly point and click, but it is definitely one of the best ones. It keeps me entertained constantly, with the quirky characters, funny actions, and excellent dialogue. This makes for one of the greats. I played this game till I beat it without stopping, it's that good. There is the main story, which is filled with awesome characters and locations, as well as small minigames like car bomb (like battleship), and having Max jump over road signs while on the roof of Sam's speeding police car.

The graphics sure are no next gen quality, but there is never a moment or time that I don't know what I was looking at, you know what I mean. The graphics are perfect for this type of game, they are cartooney and the game has a great framerate, with zero slowdown. (This should be expected especially for a game with hardly any action).

What can I say about the sound? The game that I downloaded was not the "full talkey" version, so it didnt include voices. However, the voices in the other version of the game are great. They are clear and the voice actors have some pretty funny jokes here and there. Other than the voices, the music in this game is good and it is different in each location. The good thing, is that all of the music goes with the situation that you are in.

This game is definitely worth checking out. It is still one of my favorite games out there today even with all of those new generation games flooding the market. This game isn't no Pac man either, it is a really good game that you need to use your brain to think out some puzzles. Somehow however I was able to remember a lot of the stuff my brothers did. It took some fun out of the game, but try it out! 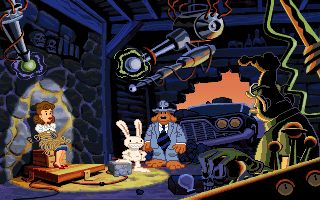 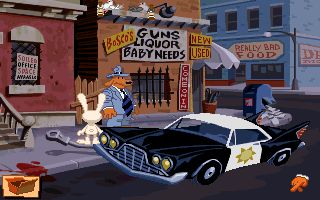