Stephen Granade posted an excellent review of this fun old game from Infocom in SPAG, so I'd like to quote it here in full: "On your first big archaeological dig, you manage to waste most of your money and alienate your workers. To top it off, you can't find the pyramid you're after. And then your crew drugs you and abandons you...

The game's parser is up to Infocom's usual level. Michael Berlyn's writing helps bring the pyramid to life, although I found some sections of the pyramid to be a bit weakly written. The plot moves along fairly briskly at first, then widens to allow more exploration once you find the pyramid. There are no true NPC's in the game; how many characters are you likely to meet while exploring a long-dead pyramid? My wildcard points went to the game's hieroglyphics. I had a lot of fun trying to decode them, and they made many of the puzzles solvable on the first try.

Infidel is of medium difficulty, an entertaining game but not a true classic."

While I agree with Stephen's review, it's worth mentioning that Infidel has one of the worst endings I've ever seen in a game. Those (myself included) who hate the ending of Monkey Island 2 can expect a similar, albeit worse, kind of anti-climactic finale that would make you feel not only unrewarded, but as if all your efforts have been in vain. I think it's a love-it-or-hate-it kind of an ending, and is definitely not everyone's cup of tea. Infidel is definitely an old game that's worthy of an Infocom name, although IMHO the ending ruins much of its play value. 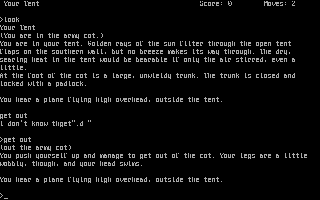