The plot of The Black Sanctum: "Encounter the forces of black magic as you roam around an old 18th century monastery. See all the evil locations in this spooky adventure in full hi-res detail. If you like suspense, you'll love searching out and destroying the evil in this classic tale." 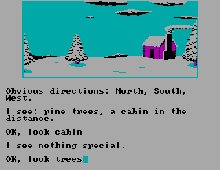 People who downloaded this game have also downloaded:
Black Cauldron, The, Azrael's Tear, Apprentice, Below The Root, Armaeth: The Lost Kingdom