People used to like this game a lot when it was released in 1990. I had no chance to play it back then (high software prices made me carefully select the games) but when I finally did i found this game to be nothing special. It is a typical arcade with a blonde hero armed with a sword and a shield. The graphics are cartoonish and cute, but too many colors were used and it doesn't look as good as it could have been. If you like arcades you might like Ivanhoe. 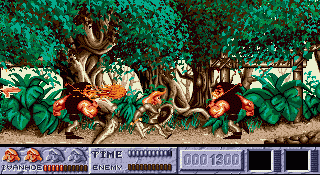