Micro League Baseball series are surprising little games for their time that sport graphics and gameplay improvement with each new version. The games offer a selection of history's most powerful teams and you can pit them against each other in league play. Each even has a stat compiler that allows you to keep records on each individual. I was impressed at the amount of strategy that can be used in each game. You can go head to head with another human or you can play the computer, decide which players are in the line up, what pitch to throw, how to swing, how to run the bases, how to position your fielders, etc.-- a baseball strategist's dream. With the fact that you can get team disks, the replay value is very high. They are games that belongs on every sports fan hard drive. I rate them a 4 out of 5.

Despite the confusing name, The Manager's Challenge is actually the third game in the series-- using the same EGA graphics from MLB2, with many more players, player ratings, stadium factors (Royals, Yankee, and Dodger), and more enhancements. For the best game in the series, play the final release: Micro League Baseball 4. 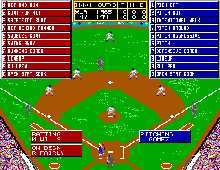