It's party time! It's Wheeeeeeeel of Fortune time! You do know about this TV show, now do you? Of course you do! Now you can be a competitor yourself and even if you do not like the show you WILL love this game!

I admit to be one of those people who do not like the show, but this game rocks! It is interesting to play it alone, but if you have a friend or two it is much, much better. This is a great family game and you should definitely have it! 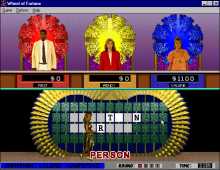