Now You See It

Now You See It is a decent computer version of the short-lived game show hosted by Chuck Henry, which was the show CBS replaced the hugely popular $100,000 Pyramid with (in one of their worst decisions ever).

NYSI is best described as a "word search" game in which the winner is determined in four rounds. In the first round, two new players competed for the chance to take on the returning champion. They sit facing a big board which contains 4 lines and 14 letters on each one. A clue is read (e.g. "What kind of cartoon animal coined the phrase 'What's up, Doc'?) and if a teammate buzzes in and finds the line that the word is located in, his/her partner (whose back is turned throughout the game) must turn around and find the answer (in this case, "rabbit") and its positon (the position of the first letter in the word) on the gameboard. If they do so successfully, they score points, depending on the position of the word on the board (for instance, if the word was on line 2, and the first letter in it was in position 7, that would be 9 points = 2+7). The game goes on in a similar fashion for 2 more rounds to eliminate contestants. The winner from the third round then gets to play the appropriately named Solo Game for a cash jackpot, in which he/she must find 10 answers to question on the board in 60 seconds.

The computer version of the game is quite faithful to the TV show, although most questions are too easy, and blocky, sub-par graphics are a nuisance. If you like the concept, though, you should give it a try, although the game (and the TV show itself) is simply not as much fun to play as more popular game shows, e.g. Jeopardy! or Classic Concentration. Those who are patient enough to memorize all the rules will probably enjoy it for a short while, but quickly forget it soon after. 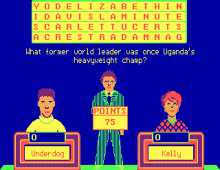 Now You See It screenshot