In my opinion the greatest (and most underrated) game show ever made, MTV's Remote Control is a fun, irreverent 'trivia quiz' game show that features offbeat humor, eclectic questions, and a great atmosphere.

Despite having a great show license, Hi-Tech Expressions botched the potential so bad that the game might discourage non-fans from watching the show altogether. For starters, the game is devoid of any challenge whatsoever with its multiple-choice format which comprises three answers. Unless one of the three contestants is just plain stupid (and it does happen in the computer's case), someone will get the question right. As if only three choices weren't enough, one is almost always just plain inane, which basically gives you a 50-50 shot at guessing the correct answer.

You'll find that in two-player games, whoever can buzz in most quickly will win. And you'll always triumph in one-player games-- always. If there's anything good about the game, it's the fact that some of the categories that made the show so great are present and often funny. After all, who can't like "Brady Physics"? But much of the fun categories are absent, as is the bonus round for the winner. While the "name the artists in these nine videos" format would have been impossible for the PC given mid-80s technologies, the game is definitely missing something without a reward for the winner. Overall, if you're fan of the show, you'd better off petitioning MTV for a remake on TV, or play You Don't Know Jack instead. A disappointment, to say the least. 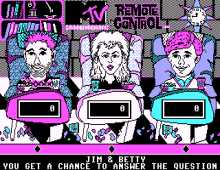