Day Of The Tentacle

This review will probably be a biased one since I'm personally a hardcore fan of all LucasArts adventures produced in the nineties. Day of the Tentacle is simply marvelous. The game is packed with humor, witty sarcasm, interesting characters and even-more-interesting scenery and places. It's immensely fun to play, and to solve it you'll need to let your imagination run wild.

The user interface is standard - you have some basic commands at your disposal and you'll have to work your way around by using them. The storyline is excellent and will keep you busy and entertained at all times. As for the technical part, the graphics are beautifully drawn and are certain to make you laugh every now and then. The music and sounds keep up with the rest of the game just fine. All in all, a true gem that shouldn't be missed by anyone!

After aiding in the rescue of cheerleader Sandy from the brainwashed mad scientist Fred Edison, mild mannered geek Bernard Bernouli thought he had seen the last of the Maniac Mansion. He was wrong. Horribly wrong...

Some years after the kidnapping incident, Bernard gets a message from his friend Green Tentacle. After gaining limbs and superior intelligence from drinking sevage produced by the good Doctor's obligatory toxic-waste-producing-machine, Purple Tentacle started to plan world domination, Prompting Fred to imprisson the two Tentacles in his basement. Bernard immediately, although reluctantly, prepares a rescue mission, taking with him his two college roommates: Hoagie the rock-n-roll roadie, and lawerne the unbalanced med-student.

But when Bernard accidentaly frees Purple Tentacle in the process, the rescue mission quickly devolves into a desperate attempt to prevent him from conquering the world. Using the Doctor's malfunctioning time-machine the trio is scattered through time. Now the gang must find a way to return to the present before it's too late!!! (Or early, however you look at it).

Released in 1993, Maniac Mansion: Day of the Tentacle is an independent and hilarious sequel to Lucasart's first smash-hit adventure considered by many equal, if not superior, to the original. Containing the trademark Lucasarts Humour at it's greatest, It is guaranteed to keep you laughing your face off from beginning to the end.

DOTT was the last game to use the word-select interface that had been used in every LA adventure game before, with the exception of Loom. But in the years between the original and the sequel the number of commands awailable to the player had shrunk to a mere nine: Give, OPEN, CLOSE, PICK UP, LOOK AT, TALK TO, USE, PUSH and PULL. Instead of harming gameplay, however, this reduction might have actually enhanced gameplay by removing unnecesary commands.

Being a sequel to Maniac Mansion, DOTT brought back the concept of simultaneously having control over many characters, although this time you unfortunately can't select which characters you use. The idea of putting each character in a seperate time plays out wonderfully, with the player able to "flush" most items through time to another character, while finding a way to get "incompatible" items to a different time is a subject to more than one puzzle. The player can switch between characters at any time, provided that he/she has activated them (getting control over Hoagie and Lawerne requires the Player to complete a puzzle)

Visually the game is great, if a bit pixelated. The characters are done in a hilarious caricature style while the environment is beautifully drawn in a surreal and cartoony manner. The Sound is also great, with a lively musical score that is memorable but not intrusive, wild cartoony sound effects and good voice acting fitting the characters perfectly. The game is not difficult, although in no way a pushover, and will keep you entertained and engaged without driving you nuts or desperate for a walkthrough. Therefore this game is ideal for newcommers to the adventure-game genre as well as the veterans (the few of them who haven't allready played it).

If there is one gripe I have with this game, it's lack of replayability. Unlike the original Maniac Mansion, DOTT only features one ending and doesn't offer any alternate solutions. Once you finished the game once, thats it. But that is not to say you won't be playing it again. With it's great humour and wacky and clever story, DOTT becomes sort of like a great movie; once you've seen it once, you know how it ends. But it won't stop you from enjoying it again. At least it hasn't stopped me at all. 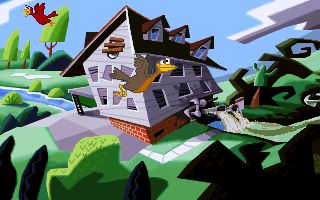 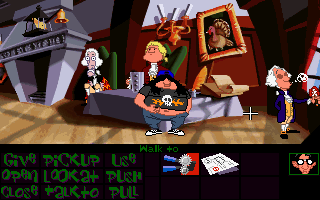 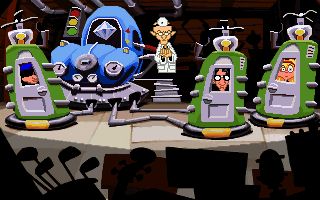 Day Of The Tentacle screenshots