Guilty (a.k.a. Innocent Until Caught 2)

This sequel to underrated Innocent Until Caught sports the same flexible game engine, with better and longer plot. Intergalactic two-bit thief and failed womanizer Jack T. Ladd is back, but this time you can also choose to play as Ladd's female nemesis and potential love interest, who has her own different path that converges with Jack's near the end.

The puzzles in Guilty are not as challenging or innovative as those in the first game (there are a lot less items you can combine, for example), although they are still fun to solve. Dialogues and plot also are not as well-written this time around, but the 2 diverging paths that make the game replayable at least twice more than makes up for it. A fun game if you like the first game, but nothing revolutionary. If you liked tongue-in-cheek, "light" sci-fi games, and can stand cheesy dialogues and cliche plot, give this one a try. If not, play the first game, or Beneath a Steel Sky instead. 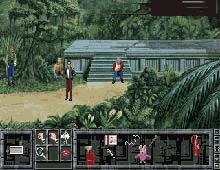 Guilty (a.k.a. Innocent Until Caught 2) screenshot

People who downloaded this game have also downloaded:
Innocent until Caught, Darkseed 2, Flight of the Amazon Queen, Inspector Gadget, Darkseed